“Insisting that »there is no alternative« is yesterday’s political slogan. [...] there are hopeful signs that some of the discarded strategies and solutions that helped re-build the global economy after the Second World War are receiving a much welcomed twenty-first century makeover and are attracting a new generation determined to build a better world. […] Prosperity for all cannot be delivered by austerity-minded politicians, rent-seeking corporations and speculative bankers. What is urgently needed now is a global new deal.” United Nations Conference on Trade and Development (UNCTAD): “Beyond austerity: Towards a global new deal”, New York and Geneva 2017.

Fundamental changes in our common life across the globe are necessary and possible. The aim is a peaceful, equitably developed and non-destructive future for all of us. This can be realised by solidarily united and cosmopolitan people, as this (global) society is human-made and thus changeable!

Education, science and civil society commitment should be intertwined more closely. –What is needed for this at the university?

An increase in social accessibility and the removal of performance pressure and obstacles; solid basic funding through the general public; critical science; a variety of fields of study, theories and methods; historical, philosophical and ethical education; comprehensive approaches of inclusion and democratic participation!

All of this is necessary so that students, teachers, lawyers, doctors, social workers, theatre professionals, librarians, administrators, researchers, media professionals, musicians and people who are active in other ways can achieve humane changes in economy, politics and culture.

The urgently required improvements at the university can only be attained by its members. Further discourse is necessary concerning the material and cultural obstacles that must be addressed to achieve a positive development of all. This should take place everywhere: at canteen tables, during lectures and conferences, at assemblies and in committees, through demonstrations and within the broader public.

The Academic Senate (AS) is the highest democratically elected committee at the university. Interdisciplinary initiatives involving all sections can be introduced and discussed here. This is what we want to work for.

We are the “Bündnis für Aufklärung & Emanzipation (BAE!)”–list 1. Our candidates are members of the students groups “Liste LINKS”, “harte zeiten – junge sozialisten”, “SDS*”, “Verband der Studierenden aus Kurdistan” as well as critical student council activists and other active participants: together!

We share a commitment to the peace movement, against the political right-wing, to solidarity with refugees and to the trade unions. Consciousness of our history leads us to a cooperation between members of DIE LINKE and the SPD. This is where you find our candidates. We rely on lively participation!

„I warn you, beware, you can’t relax – No breakdown yet, but see the cracks; ... It’s the mass decides.“ From: Heinrich Heine, „It’s the Mass Decides“, Poems for the Times. In: Hal Draper, The Complete Poems of Heinrich Heine: A Modern English Version, Suhrkam/Insel, 1982, p. 770. 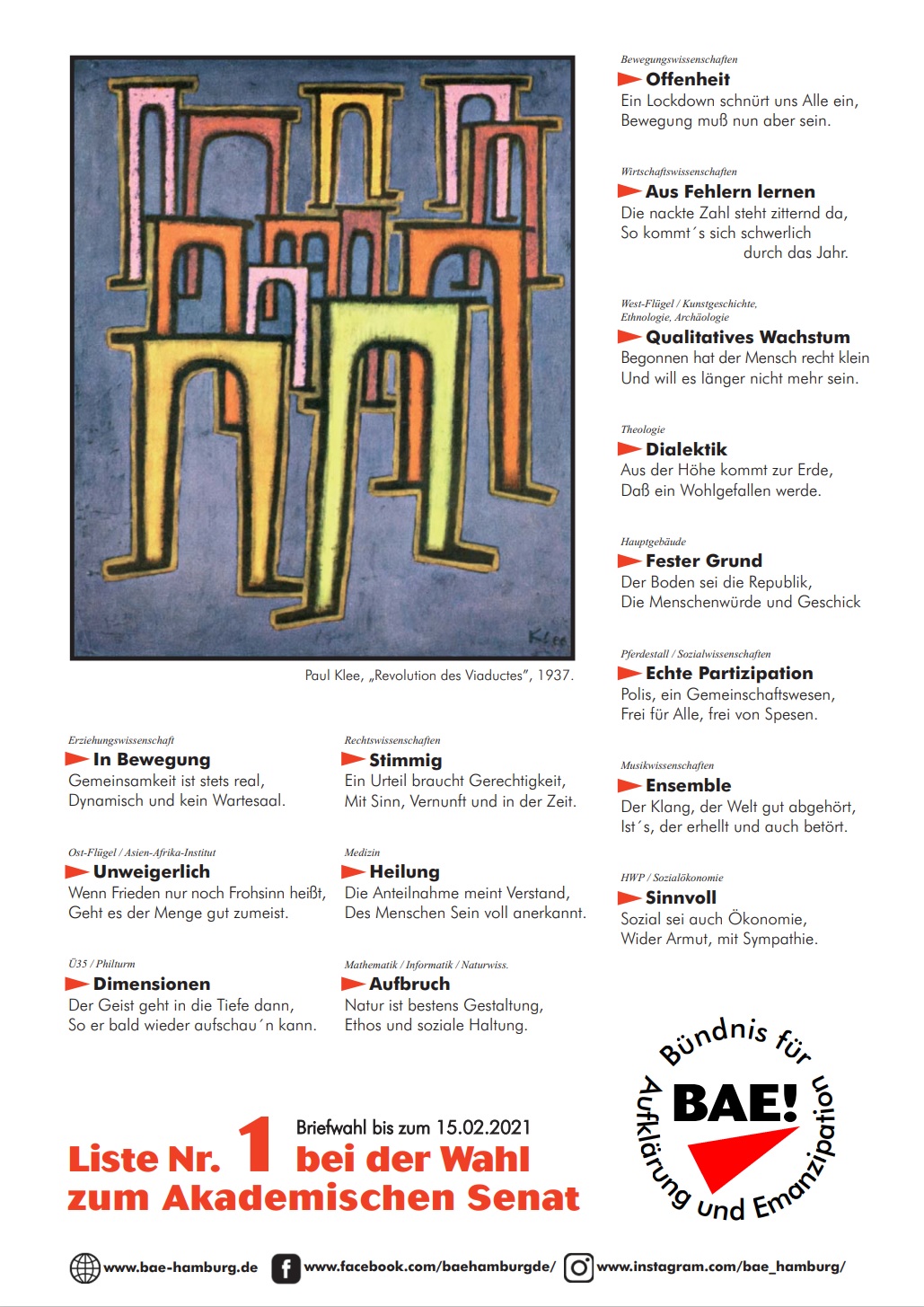 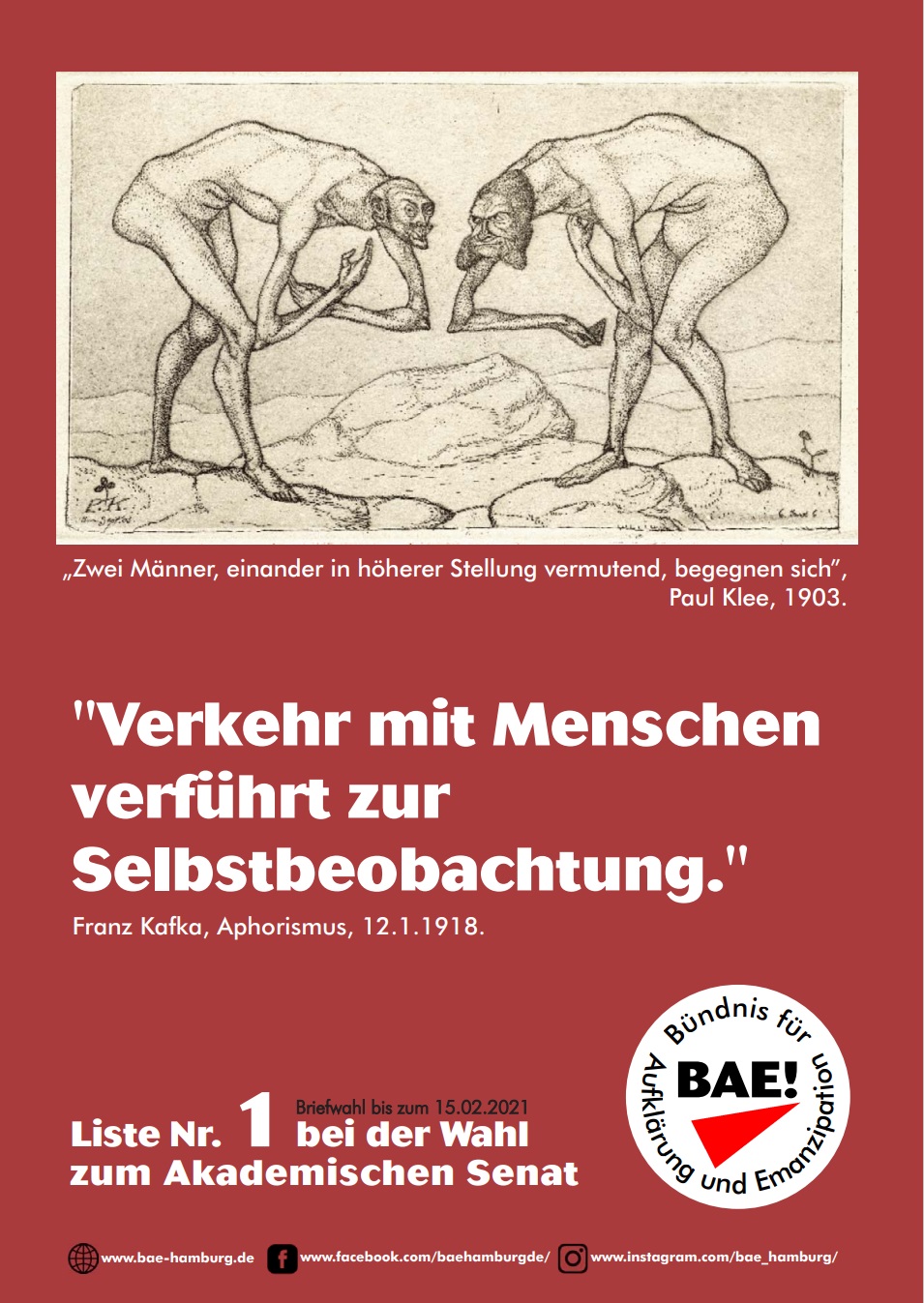